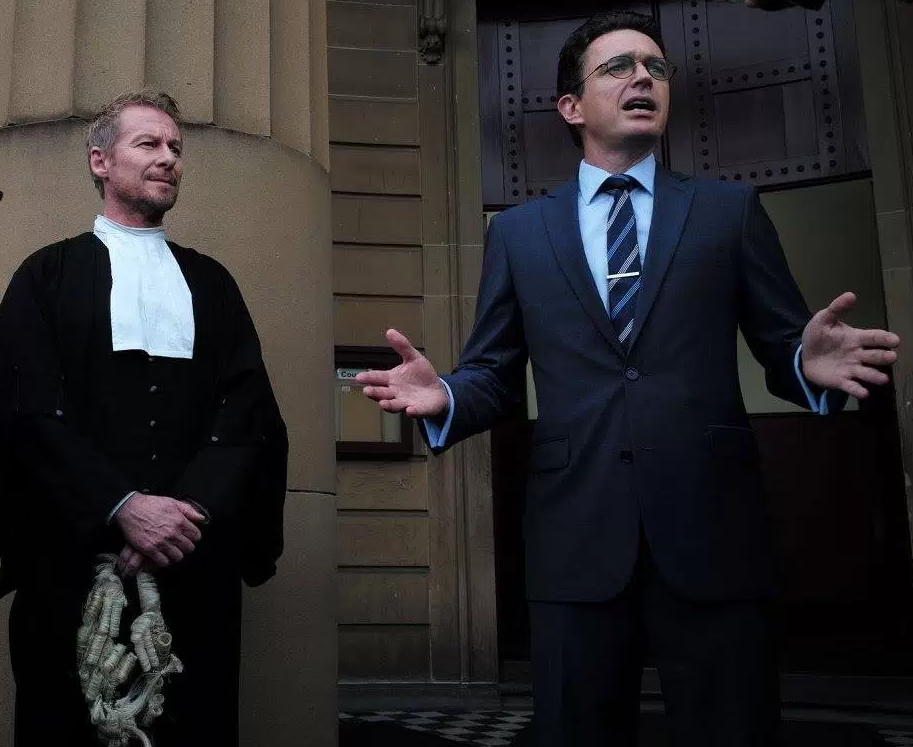 Recently I’ve been watching an Australian TV series called Rake. The title character, Cleaver Greene (played by Richard Roxburgh), is a barrister and a deeply dysfunctional man who consistently hurts the people around him through his selfishness and inconsideration. We’re invited to like him because he’s also funny and sexy and charismatic, and because deep down he has a moral compass and a great deal of love, even though he’s generally shit at showing it. This makes him part of a long and problematic tradition of male antiheroes, which is worth analyzing but not what I have in mind to talk about right now. The point is, he’s fun to watch, but he’s not someone anybody should want to emulate.

Cleaver has a rival named David Potter, played by Matt Day. David has dark hair and wears round glasses, and Cleaver habitually calls him ‘Harry-sorry-David’. Just like that, with no pause between the ‘mistake’ and the ‘correction’. If they were friends, then ‘Harry’ could be an affectionate nickname for David—the way Scarlet (Danielle Cormack) is called ‘Red’ and Barney (Russel Dykstra) is called ‘Barnyard’—but they’re not, and it isn’t. The immediate ‘-sorry-David’ bit drives that point home. It says ‘I know that’s not your name but I don’t fucking care’, and it pre-empts any correction or objection from David or anyone else who might intervene on his behalf.

At one point in the series, Cleaver’s son Fuzz (Keegan Joyce) says this to him:

Why is it you have to mock anything you don’t understand? Anyone and anything who’s different. Who even slightly challenges your fucked-up world view. You have to reduce it to a funny line. This is why you’re going to end up sad and lonely.

Anyway, that’s the kind of person you sound like if you deliberately call someone by the wrong name or pronoun and then follow it up with a disingenuous correction instead of making a good-faith effort to get it right in the first place.

I recently stumbled across the following story in an old file on my hard drive. Judging by the modification date on the file, I seem to have written it near the end of 2002; in any case, it’s old enough that I was still using Microsoft Word (shudder), and because it was before I started this blog, I don’t think I did anything with it at the time. Anyway, it’s in the tradition of Raymond Smullyan’s knights-and-knaves logic puzzles and their many other imitators, but with a linguistic angle. I decided I still like it well enough to post it now (although if I were editing it I would probably tell myself not to use “smiled <adverb>” twice in such a short space).

A linguist on the Island of Knights and Knaves

When she landed, she was greeted by two women. “I’m Cass,” said the first one, “and this is my sister Sandra.” The second smiled indulgently. “Actually,” she said, “I’m Cass and she’s Sandra.” The first woman then said something inaudible. “I’m afraid I didn’t hear that,” said the linguist. “She asked you what country you come from,” said the second woman. “No, I didn’t,” said the first, “although I would be interested to know.” Which woman was which?

The Netherlands has one of the lowest percentages of non-Dutch nationals living within its borders in the EU, according to new figures from the EU statistics office Eurostat.

The thing about online news stories is that they, and their headlines, get updated as new information comes in. I'm not sure there's ever any definitive version anymore—I guess the print version is the version of record, but it seems as if the print versions nowadays are often written on the assumption that everyone's already read the basic story online already, and so they just highlight whatever the most recent development is as of press time.

The frustrating thing about this is that when I see a funny or ambiguous headline online and I want to tell you about it, sometimes it's changed by the time you get there. Oh, and also our culture is bereft of any definitive day-to-day record of those events that alter and illuminate our times, but what can you do, eh?

Anyway, at some point in the recent past you could read these headlines in the online version of the Toronto Star:

Cover Me
Toby Keith singing Ke$ha? Kenny G saxing it up with Megadeth? Pick an artist to cover any other artist's song -- who would be singing what? Why would you find this mix-up so amusing, amazing, or just plain weird?
Reply 26
Bernard Cribbins, "I'm too sexy." For all the obvious reasons.

Yesterday was Talk Like a Pirate Day, for those who celebrate it. But did you know that today is Maraud Like a Rhetorician Day?

Thank you, Mr. Black, but I really did not need to hear about your constipation. The following comes from an article in the Toronto Star about an interview with Conrad Black in Vanity Fair:*

Even the zombies in this town are nice. I was biking home from the grocery store yesterday, and had to wait for a bit at a crosswalk while a teeming horde of undead shambled by. At one point, a few of the zombies decided that they were collectively taking rather a long time to cross the street, and paused to give some motorists and me a chance to get through. But of course we declined and waved them on; they did have the right of way, after all.

writersblock asks:
Prone to puns
How would you describe your sense of humor in six words or less?
Reply 1008

This man and this lizard are celebrated in song for a feat that was eventually replicated in 1903 by a Norwegian.